This post is about my new album “Heart on Fire.” Check it out on KickStarter! 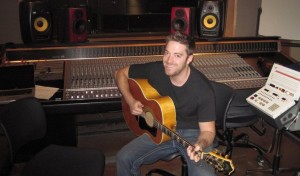 “So do you want to make a real record?”

It was 2 in the afternoon and I had been up for close to twenty hours when I heard it… so I sort of stammered… “wh-what do you mean by that?”

“You’re putting a lot into your project. But you’re creating something without professionals behind it. It’s going to be hard to take it very far. Do you want to make a real record?”

That time I got it.

I was working seven nights a week – from 6:00PM to 10:00AM – because that was the only time I could afford to use the studio. I was sleeping on the floor of the 15×15 tracking room… a room I rarely saw the outside of. I was playing every instrument myself, recording myself, mixing myself as I went along, and filling notebooks with highly detailed production notes. After completely surrendering my normalcy and sanity for over half a year, I could see the light at the end of a very long tunnel and I knew I had something to show for it.

So when a potential investor asked the question: “Do you want to make a real record?”

His offer was this:  he would spend an obscene quantity of his money to pay some people to make a “real” record. All I had to do was quit the album I was almost done with, and surrender my artistic vision to the gods of market viability. (Well… that, and give up a bunch of my back end profits.)

Put another way: He was offering a way for me to sell out.

Truthfully, the offer should have been flattering. It meant he believed in me enough as an artist to risk a bunch of money and time to try to “develop” me.

But I couldn’t help it. I was mad.

The thing is, this would have changed my life. It would have allowed me to eat something other than top ramen and pb&j. It would have meant I could register my recently lapsed car and buy gas without borrowing money. I had given everything to this record. I had spent my meager savings on months of continued production long after I thought I would be done.

None the less, I gently told him that I was already making a real record and had been for six months, and that I would have to decline his offer.

I hung up stunned.

The phone call did two things: 1. It strengthened my resolve to make a great album. 2. It got my head spinning about how art and business are equally necessary… and so often at odds.

Keep in mind: this isn’t about thinking I’m always right artistically. I’m not too proud to take advice or help.  What I didn’t want was for the market viability of the project to be the deciding factor. That’s almost never the case with good art. Many of the most commercially successful artists in history were creating exactly what was in their hearts.  In those cases the public responded precisely because the work was authentic.

I have always wanted to be successful for that reason… or not at all.

This time, I did decide to hire a producer to help me put the best album possible together… to hire musicians and engineers… to make the whole thing with a team of professionals in a top notch studio environment. I truly believe that I will get a far better end result that way. And because it is me and not someone else who is hiring the team, I can keep my artistic vision in tact throughout the process.

As the realities of a project of this magnitude became more apparent, I started to see that it could be another year before I was able to set aside the funds to do it properly. But the songs are vital now. The project is beating in my heart and I know how these things work well enough to know, that there is a window of inspiration for new work. There’s something incredible about getting the songs down while they’re still relevant.

So I decided to turn to crowd funding on KickStarter. If you don’t know about it, Kickstarter is a platform that helps independent creatives to fund their dreams without having to turn to venture capitalists, record labels, or publishers. The way it works is that lots of small donations and pre-orders from friends, family, and supporters can add up to enough money to fund a whole project.

On the Kickstarter project page, backers can pre-order a bunch of cool prizes related to the project: in my case, you can order digital or physical copies of the music, concerts at your house, personalized YouTube videos, private online shows etc. These prize packages make pledging to Kickstarter similar to buying this stuff after the album is made. But because they come in before-hand, they make it possible.

I’m headed on a seventeen hour road trip to work at a studio in Montana in 5 days. I’m about a third of the way to raising the funds to make this record. Please check out my Kickstarter project, watch the project video and order a copy of the album or check out the other awesome rewards. It only takes a couple minutes, and your pledge – even $1 – will make a meaningful difference.

Thank you so much for being a part of this.