When I was fifteen, I sent a handful of demos with three of my songs to a company that forwarded material to record labels and publishers. The rejection letter I received three weeks later was devastating. In retrospect, it was also warranted. The material was horrible. The delivery and production were sophomoric. The vocals were laughable. But I didn’t know any of that, and the words on the page crushed me.

A pattern formed over the ensuing years:

I poured my heart into a project until I was sure it was world class. I ignored the feedback of my friends and relatives telling me it was “good” but “not that good.” I sent it out to anybody who would receive it… annnnnd…. I got a ruthless rejection letter to bring me back down to earth.

After five years and about as many trips down rejection lane, I simply quit. I stopped sending things out. It got to the point where I wouldn’t try out for free contests because I just figured I didn’t have a chance. Why face the pain of another “authority” informing me of my inadequacy?

I recently read an absurdly thorough biography of the early career of The Beatles. It turns out that their famous Decca rejection was not a solitary incident, but one of many. They were rejected a lot. And many of the doors they managed to force open, slammed shut before anything happened. They had started filling rooms with rabid fans in Liverpool and Hamburg, and they would go south toward London and play for a dozen people who didn’t care. Brian Epstein was working around the clock to get something to happen. All four Beatles were on the verge of giving up before anything actually did. The chain of events that led to their eventual rise to international fame is extraordinary… and fraught with rejection and failure.

Steven King collected hundreds of rejection letters. Usually they were form letters, but occasionally one would contain a handwritten note with constructive criticism of his actual piece. He pinned those to his wall. He was proud to receive anything that merely acknowledged his submission as something unique from the others. When he had begun a draft of Carrie, he threw it in the trash because he couldn’t see a way to make it work as a short story, and – in part – because he was so sick of rejection. His wife pulled it out, read it, and begged him to finish it. A year later, he sold the paperback rights to New American Library for $400,000.00. 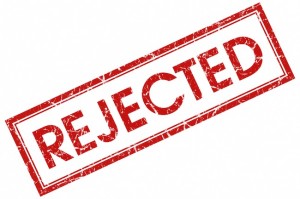 There are enough stories of that kind to fill a hundred pages. And the point that is often made about those stories is something that belongs on a motivational poster on Pinterest.

Something along the lines of: “‘They’ are wrong about you. Ignore the naysayers and you will succeed.”

Don’t get me wrong. I’m with Seth Godin on his idea that we should pick ourselves instead of waiting to be picked by the gatekeepers. I’m all for self- publishing and self-creation. But this isn’t just about gatekeepers. It’s about everything that involves risk in the face of rejection.

I believe that one of the fundamental qualities of a great creator is the ability to keep putting stuff out. It’s not only persistence, but mental toughness. Am I tough enough to let those letters pile up? Am I tough enough to send out ten thousand pieces of my heart, and carry on in spite of the skepticism or silence that greets them? Can I continue to create with grace? Can I smile as I stuff the envelope for number ten thousand and one?

For years, the answer to all of those questions was no. I was devastated to the point of inaction and despair by every rejection, whether from the public or from the authorities in the business. It took weeks to recover every time. I clung to every implied “yes” and passing nod of approval like a drowning man to a life raft, while I refused to even place my work in the path of a potential no.

I learned to deal with rejection when it came to booking shows because I had to make a living. I learned to care much less when people didn’t like my stuff. I even started asking people for feedback who I knew would be brutally honest. But there was something about taking a real shot with my work and getting shut down that I couldn’t handle.

There is a fundamental truth that changed everything. I first encountered it on a video lesson by author and blogger, Ramit Sethi. It’s so damn simple, but if more people really GOT it, the world would be a better place.

The very thing I do to protect myself from rejection, absolutely guarantees it. By not sending my stuff out, I’m actually rejecting myself.

I remember the moment the concept sunk in. I remember every detail of my surroundings. I got chills. Tears filled my eyes as I considered the overwhelming implications. I had spent a decade rejecting myself in order to ensure that I didn’t give anyone else the chance.

I made one decision right in that moment: Never again.

I got back in the game.

I made a list of things that I thought would be cool to try for, and started sending out submissions. I considered many of the things I was trying, to be long shots… but the goal – after all – wasn’t to get a yes. The goal was simply to put stuff out. I would have been glad to collect a giant stack of rejection letters, because every no from somebody else was an indication that I didn’t reject myself.

A funny thing happened: they didn’t all say no… not even close. New worlds of opportunity opened up. My whole career is shape shifting to fit a bigger game. My Kickstarter project, the festivals I played this summer, the incredible artists that have become friends and a part of my inner circle, the tour I’m booking now to take Heart on Fire to the world… all of it is the offspring of deciding to step up, and refusing to reject myself.

I hope I get a lot more rejections as I move this dream to a new level, because rejections are a sign that I am aiming high. I hope I can be strong enough to keep trying out for stuff that looks like it’s out of my reach. In the end, this whole thing is a numbers game… a game that I am – at long last – playing.