“Every adversity carries within it, the seed of an equivalent or greater benefit.” – Napoleon Hill

“One more time. Get up. Fight. This is not the end of the story.”

So remote. So foreign. So distant. I wasn’t sure if I had really heard it. Well… I definitely hadn’t heard it in a literal sense, but from somewhere in a barely-perceptible, misty, unfamiliar corner of my brain, those words had come to mind.

I was alone in my bed… in my tiny, 80s-wallpapered, miserable excuse for a room… in a house I loathed living in.

I had abandoned my purpose. Not intentionally. Not in the way most people think of when someone mentions “giving up.” No. I had given up like a glacier…inch by inch… hour by hour… day by day. I had let my dreams turn from active ambition to passive fantasy so slowly that I hadn’t even been aware it was happening. 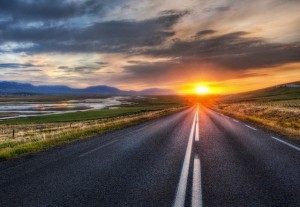 Moments of lofty ambition after my third beer…

“One more time.” It came again. Louder this time. I tried to wipe the tears away, but they were really flowing now. They flowed from the most intense form of cognitive dissonance I can think of: the feeling that who I am is a thousand times more than what I’m demonstrating with my actions.

I had been through seminars and read dozens of self-help books. I had cultivated a positive attitude about nearly everything in my life since high school. I thought I was bulletproof when it came to my outlook. But there I was… having lost my grasp on very concept of hope, lying on my back at three in the afternoon… with tears in my eyes.

But in the next moment, I was considering the voice. What if I did try again? What if one more time could carry me out of this place and into the sun?

The battle with my tired limbs began.

“Get up,” I said to myself. I wanted to, but my body wouldn’t listen. “Come on, get up.” This time I said it out loud. It was as if physically getting up out of my bed was a metaphor for getting up again in life. Everything inside me wanted to stay put. I didn’t have the hope or the energy to move. “Get up, dammit!” This time I shouted.

Something incredible happened. I had moved all of three feet, but the spirit inside me had turned a corner. I’ll never forget the way that felt. For the first time in a long time, I thought I might have a chance.

Now I would like to say that every subsequent moment and every subsequent day was some sort of revelation in personal progress, and that I stepped up to a new level as a man, but that would be a lie.

What I did do: I started to write a song that night. I wrote a blog post the next day. I called a friend about the possibility of booking a show on day three. On day five, I finally walked over to the gym that was a block from my house and got a ten day trial membership. More importantly, I put on my barely recognizable, work-out clothes, and ran three miles on the treadmill.

I still felt like hell. But – slowly at first – light started peaking in through tiny cracks that were forming in the dome of darkness I had built in the preceding months. Within about three weeks, it occurred to me that I had – in fact – gotten back up. I was ready to give it one more shot.

That “one more shot” was THE shot. It’s the shot I’m still taking. I look back on that day often and wonder what kind of razor’s edge I was really on. Where would I be if I had decided not to physically stand up? I don’t know the answer to that, but I do know that the whole world of beautiful events and life changes and damn near miracles that have happened since then… are ALL the offspring of that decision.

That brings me to the point I want to make with this post. One of my favorite authors, Steven Pressfield, talks a lot about what he calls the “all is lost” moment. It’s the moment in any great endeavor where it seems like you’ve come up against an impassible wall. You suddenly see the folly of ever trying in the first place. You wonder how you deluded yourself into going this far down the road. According to Pressfield, that moment is inevitable in the creation of every novel, the pursuit of every plan of personal improvement, the building of every business, the making of every work of art. Anything that represents a bold act in the face of fear, eventually leads to an all is lost moment. “You can set your watch by it.”

But there’s another part of the story that is not as easy to remember: the all is lost moment is ALWAYS followed by a breakthrough. When everything falls apart, things you hadn’t even considered are falling into place.

There is – of course – a choice. And sometimes the choice we make is the one that perpetuates the all is lost moment until it becomes the all is lost year or worse, the all is lost decade. But I truly believe what Pressfield believes, that on the other side of “all is lost,” there is a breakthrough that changes everything.

That brings me back to the quote from the beginning of this post: “every adversity carries within it the seed of an equivalent or greater benefit.”

The act of getting out of bed that day was one of the most important breakthroughs of my life to date. But there’s more to the story. The darkness itself was a gift. The songs I wrote in the wake of that hard time were the most truthful songs I had ever written. The way I approached my career once I got back on my feet had a new fire to it. I have never been down that low again, not even close. I know what’s down there and experience is the ultimate teacher. There’s something about understanding how hard it is to get back up that makes me ten times stronger in the face of challenges that have the potential to knock me down.

I try my best to remember that when I’m in the middle of a tough time. And trust me: there are still plenty of those. The all is lost moment is a test. If I feel like I’m in over my head, I’m doing something right. I believe there’s a breakthrough coming. In spite of the struggles that are inherent in my choice of a profession, believing that has never let me down.