I’ve been reading and listening to a lot of biographies lately. I love them. I love that they’re never what I expect – even when I know a lot about the subjects before-hand. I love discovering three-dimensional human beings behind endlessly-propagated caricatures and anecdotes. I love the moment in the course of every good one when I start to feel like I really know the person… like he’s an old friend. And as I experience the stories of the lives of each of these “friends,” one vital thought keeps surfacing in my mind with an urgency that can’t be ignored… a simple and painfully obvious truth:

There is no finish line. 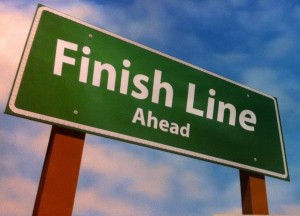 Regardless of relative achievement, notoriety, contribution, or wealth – no one gets the brass ring and lives happily ever after. It doesn’t happen… ever. The story of a human life is never over while the heart is still beating.

It’s important for me to remember that, in the depths of this creative project. The process of making an album involves insanely long days on very little sleep. Everything feels high-stakes. And regardless of expense and consequence, I know that I won’t stop working until I love the result. It’s obsessive. It’s urgent. All the time.

Of course, all of that urgency comes from a belief that when I finish the album, I will have crossed an invisible line. It’s like the idea I had as a kid, that one day I would make enough money to put an end to all of my worries; or that feeling when falling in love… that if she was in my life… I would be a better man forever.  It’s the mountain top, the Kona Iron Man, the rescue fantasy of the American Idol win or the million dollar record-deal… the idea that one day the battle will be over for good. I know better. But I also know that I’ve been living from that perspective.

And I’ve been rewarded for it.

When I was a kid, I was socially awkward and strange… and I moved a lot… which meant I never had the same group of friends for long. My solution was to focus on getting so good at something – I settled on the violin – that people in new environments couldn’t entirely write me off.

As I grew up, I built my self-image around quality. I could perform and create… and the quality would be exceptional. That was the foundation for my first feeling of worth. If I could just be exceptional enough, I would always be relevant. And eventually, I just knew that I would reach a point of mastery, where the chasing and dreaming would stop and real life would begin.

But the bar for what constituted exceptional quality kept moving. So there was always another horizon that was just out of reach. And somehow I always felt certain: “this horizon is the real horizon… the final horizon. Once I get there I will have made it.”

Of course there’s no such thing as a final horizon.

That’s why these biographies have become so important to me. They are reminders of the truth. A very strong part of my personality has to continually adjust to the fact that nothing will ever put an end to the battle. It will never be over. The hope for relief… the desire to escape the trials of life and coast, is not only folly… but it clouds my ability to see the brilliance of the life I’m actually living.

And yet… my brass ring has been an ideal involving those very things.

But what does the brass ring represent? I have thought a lot about this, and I’ve come to the conclusion that it’s really about finally being “enough.”

As in: “Once _____ happens, then I’ll be enough.” Of course it doesn’t work that way. It’s a lie. More will never lead to enough. Finish lines feel exactly like starting lines… just add disillusionment. Even the heroes in my favorite biographies – men and women who pushed the boundaries of human potential – were prone to feelings of inadequacy… feelings that the best years of their lives had been squandered… a redundant, predictable chorus of “almost there.”

So how do I reconcile this? How – when Einstein and Mozart and Emerson didn’t feel like their lives amounted to enough – can I hope to feel like mine will?

Simple: Always do the best I can with what I have where I am.

That’s it. That’s all I can do. I have no control over the finish line anyway. The only thing I have control over is the quality of my effort from where I stand. I can’t guarantee that my effort will lead to anything. I can’t guarantee that my best intentions when it comes to the people in my life will lead to happy or healthy relationships. I can’t be certain that my work on this album will produce something that anyone will want to listen to. There’s no way to ensure that – for all my desire and striving – this passion of mine will lead to any noteworthy achievement.

See… there’s a profound truth that both trumps and validates everything I’ve said to this point. It’s the truth that hides between the lines of every good story. It becomes clear somewhere in the course of every human endeavor. I’ve seen it shining in the authentic smiles of children at play. I’ve felt it burning in the tearful eyes of a friend, who was struggling with things I’ll never have to face. It’s a damn cliche. And yet – for all the lip service it is given – it is an idea that few people truly believe in.

We are already enough. We always have been. We always will be. It doesn’t matter what we’ve done or where we’ve been.

Enough is a birthright.

Anyone who says anything else, is probably trying to sell something.