“Don’t get so caught up staring at the mountain, that you trip over stones in your path.”

It changed my life.

My dream was a mountain… barely visible on the horizon. I was stumbling along the winding road through the plains, obsessively focused, thinking: “if I stare at that mountain with enough intensity, it might just move across the distance to meet me.” 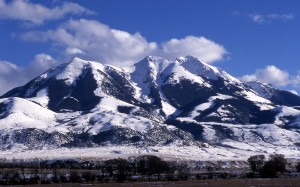 I used to believe that was the best way to go about it.

The dream was so monumental, so all-consuming, so multifaceted; that I got lost in its immensity. I got so overwhelmed by the distance that I entirely ignored the next thirty feet of road.

There’s a reason for that. The mountain is glamorous and exciting. The road is not.

“The mountain is so far away… what the hell do I do now?”

Based on my experiences over the last couple of years, I’ve developed a theory:

When it comes to the big stuff, it doesn’t matter what I do now. What matters is that I do something.  What matters is looking at the next thirty feet of road, picking an arbitrary point, and saying: “how do I get there… to that fencepost?”  Then my only job is to go for that. Whenever I’ve managed to make a big dream happen, the process was messy and unpredictable. There was no way to determine the “right” next step.

It’s easy to worry about doing the wrong thing. It’s easy to be uncertain about the consequences of every action… but I’ve found that if I let go of the idea of “right” and “wrong” steps, and simply move in any direction on any aspect of my dream, insights for course correction are inevitable. Being in motion changes the game.

The process of creation serves as an incredible example of this.  It’s terrifying, even crippling, to face a blank page. I have spent months avoiding a songwriting project because of it’s size. Here’s some advice that I got from a writer I know via his college composition professor:

“Sit down and write. Just write… anything… with no concern for its quality.  Start typing random sentences.  Turn them into a paragraph… and congratulations. You’re ahead of ninety percent of so-called writers on the planet.  Once you’ve been writing total garbage for ten minutes, an idea will come. That idea can be the foundation for something better.  In a half-hour you’re off to the races.”

It works the same way with every kind of dream.

Recently, a friend confided in me that he was thinking about giving up on a passion he had cherished and chased since childhood. I recognized the pattern instantly. He was so focused on the distance, that he hadn’t bothered to look at what was right in front of him. He didn’t know where the hell to start.

I wanted to help. I did my best.

This is what I would tell my friend if I could have the conversation again:

The fulfillment of a dream is the result of thousands of tiny decisions… made moment by moment throughout the course of every day of your life. In truth, the mountain should act as nothing more than a compass to guide those choices.  Your journey, no matter how large or small, begins where you are. Just pick a nearby target and move.

Once you’re in motion, time and distance will pass more quickly than you imagined. You’ll build momentum.  You’ll begin recognize the connections between events and ideas that appeared unrelated before. You’ll begin to see patterns in the madness. Secret trails through what seemed like impassible canyons, will open before you. The fog will lift and the darkness will make way for the dawn.

Barely aware of how you got there…

You’ll emerge – wide awake in the blinding light of a new sun – and you’ll stare back in disbelief over miles of mountains to a half-forgotten stretch of road.